This website describes the different filming techniques used in the film and analyzes the personalities and differences between Isa and Marie.  The author, James Bowman, states how he thoroughly enjoyed the film and shares his enthusiasm with the reader.  He provides a brief background to Erich Zonca and then proceeds to go into how the viewer of the film is led to come to certain conclusions but are proven wrong throughout the duration of time.

In this scene, Isa tries to stop Marie from going to see Chris (the rich and arrogant man that Marie has a sexual relationship with).  Isa tries to get her to see that she doesn’t deserve to be treated the way she does.  This is especially relevant to the rest of the film and apparent when Isa states that Marie is lucky to be alive.  In this scene, Isa is referring to the girl in the coma and how foolish it is of Maria to run after someone who could care less and does not want her in his life.

This review by Claudia Fischer raises some interesting points.  She refers to the plot being pointless and the lives of the characters being “pointless”.  She states the theme as depressing and boring.

“The Dreamlife of Angels”

In this review, Roger Ebert brings up the point that this French film focuses more on the people, whereas American films focus on the plot.  He states that this movie is about young people who have to work for a living, and concludes that not everyone can afford the luxury of following their hearts.

In this article, Mick LaSalle from the San Francisco Chronicle raves about Erick Zonca and his debut film.  He writes about the phenomenal acting, the fantastic dynamic, and the “strong directorial hand” Zonca offers the viewers.

I believe that I would agree with Mick LaSalle on his commentary about the film. I agree with what he states about the Isa being the main highlight in the film rather than Marie. From the beginning, Zonca focuses more on her than on Marie and it is somewhat difficult to determine why he does so. LaSalle also mentions that the acting initiated the feeling that the viewers would feel, “privileged–almost humbled—to see people in such a private and unguarded moments” and I would have to agree 100 percent. The acting is so genuine and realistic that you feel invasive. 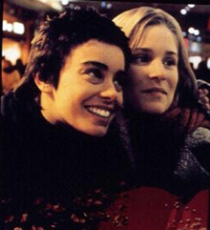 This French film is about two, broke young women–Isabelle and Marie–with little in common who become very good friends.  Isabelle soon becomes roommates with Marie who lives in a flat owned by a woman and her daughter in the hospital due to comas.  Isabelle begins to regularly visit the daughter in the hospital while Marie begins to fall into a passionate and physical relationship with an arrogant, rich man who does not seem to have her best interest in mind.  This man, Chriss, causes these two friends to disagree, and consequently, puts a strain on Isabelle and Marie’s friendship.

This film, The Dreamlife of Angels—originally titled “La vie rêvée des anges”, was the first movie directed by Erick Zonca in 1998. This film is 113 minutes long and falls under the category of Drama because it focuses mostly on realistic characters and emotional themes. Erick Zonca was 17 when he moved to France. He originally had hoped to become a writer but then decided to enroll in Blanche Salant—a workshop with courses teaching film and theater classes. He then moved to the New York to be an actor, but spent three years working odd jobs.  Meanwhile, he  discovered European cinema and decided to direct films of his own. In 1992 he directed his first short film, and in 1998, he directed The Dreamlife of Angels.

Its box office success was nearly $60,000 in the United States opening weekend and the gross value of the film was $1,726,187. The film was a fairly big success in the United States and seemed to be quite enjoyed by the majority of those who watched the film. I would convince anyone to watch it because of its rawness and reality. This film is not filled with silliness or a large amount of editing techniques. The viewer gets the sense that he or she is truly living with Isabelle and Marie; we get a sense of their lives and their struggles.

The Dreamlife of Angels Trailer